Hemp Fiber Processing: How Does It Work

With the passing of the 2014 Farm Bill, hemp cultivation in the United States became legal after 77 years of strictly enforced prohibition. The primary attributes that growers and manufacturers sought up until 1937 were primarily industrial in nature with hemp fiber being converted into items like twine and heavy rope for ships, hemp fabric for clothing, and paper from the woody core. The industrial hemp revolution of the 21st century found momentum not in the bast, hurd, or hemp seed, but in extracting cannabinoids like CBD for pharmaceutical and nutraceutical applications. This focus has been particularly strong in states like Colorado and Oregon which are leading the hemp industry in CBD production.

While it can safely be estimated that 75% of the hemp farmers in the U.S. are focused on cannabis sativa for its medicinal properties, farmers who aren’t looking to convert to row cropping are instead looking to the future of hemp production. States such as Kentucky, Minnesota, and Montana have led the way in cultivating traditional hemp crops as well as working to put hemp processing and decorticating infrastructure in place. 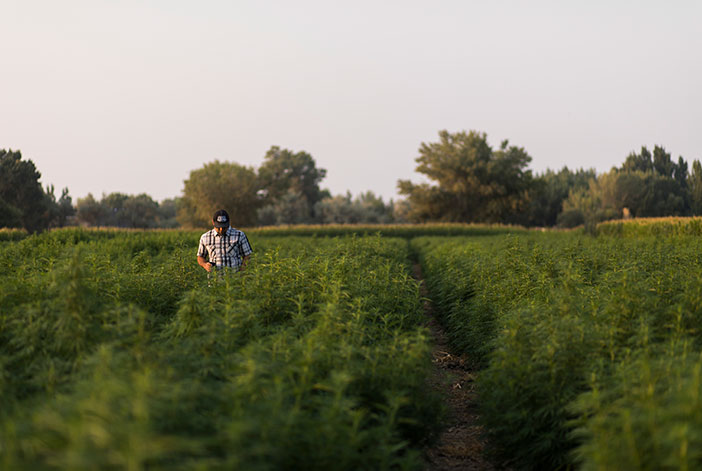 Prior to prohibition, hemp was traditionally harvested at the base and left in fiber bundles in the field to dry (a process known as field retting). While part of this process involved natural drying, microbial decomposition assisted in allowing the outer portion of the stalk (the bast or long fibers) to separate from the inner portion of the plant, known as the hurd which has wood-like properties in a mature plant. Other methods of this initial step of breaking down hemp stalks separation included water retting in which the pectin that holds the bast to the hurd is broken down using an underwater soak.

Today, modern decortication machines (of which very few exist in the U.S. on an industrial scale) can separate the hemp whether or not it has been retted. Decortication is simply the process of fully separating the two parts, rendering a stringy fibrous material and a woody chip material. The largest hemp fiber processing machines are capable of separating every component of the hemp plant (including the flower), rendering clean, high-quality raw material that is ready for manufacturers across countless industries. Products like animal bedding and building materials can be used in this raw form of decorticated hurd. Fiber, on the other hand, generally needs further processing to be rendered useful. This would include degumming, a process in which the pectin is fully removed from the fiber. For potential textile usage, further processing including combing and spinning is needed.

As the USDA works to put more standardized practices into place for producers and consumers, more investment and infrastructure will be needed to process hemp varieties to be used throughout various industries. This comes at a time that is critical for finding eco-friendly, natural fiber alternatives for single use, non-biodegradable products. Many large companies are seeing investment opportunities.

Western States Hemp (WSH) has long felt that fiber hemp will account for a larger portion of the overall U.S. hemp market when compared to CBD production, with processing infrastructure being the necessary transition factor. As a result, WSH has positioned itself by being the only company in Nevada to cultivate both high CBD hemp as well as industrial fiber, seed, and oil hemp. Companies looking for experienced hemp growers with the capacity to scale to meet client demands can reach out to us here. Our farmers at Western States Hemp look forward to working with you!

Our emails are always open if you have any questions or are interested in starting a project with us.